Amazon Mechanical Turk (MTurk) is a crowdsourcing system in which tasks are distributed to a population of thousands of anonymous workers for completion. This system is becoming increasingly popular with researchers and developers. In this paper, we survey MTurk workers about their demographic make-up and usage behavior. We find that this population is diverse across several notable demographic dimensions such as age, gender, and income, but is not precisely representative of the U.S. as a…
nhlrc.ucla.edu
Share This Paper
150 Citations
Highly Influential Citations
10
Background Citations
55
Methods Citations
5
Results Citations
9

SHOWING 1-10 OF 12 REFERENCES
Crowdsourcing user studies with Mechanical Turk
TLDR
Although micro-task markets have great potential for rapidly collecting user measurements at low costs, it is found that special care is needed in formulating tasks in order to harness the capabilities of the approach.
Moving the crowd at iStockphoto: The composition of the crowd and motivations for participation in a crowdsourcing application
TLDR
Results indicate that the desire to make money, develop individual skills, and to have fun were the strongest motivators for participation at iStockphoto, and that the crowd at i Stockphoto is quite homogenous and elite.
Cheap and Fast – But is it Good? Evaluating Non-Expert Annotations for Natural Language Tasks
TLDR
This work explores the use of Amazon's Mechanical Turk system, a significantly cheaper and faster method for collecting annotations from a broad base of paid non-expert contributors over the Web, and proposes a technique for bias correction that significantly improves annotation quality on two tasks.
Towards a model of understanding social search
TLDR
This work has integrated models from previous work in sensemaking and information seeking behavior to present a canonical social model of user activities before, during, and after search, suggesting where in the search process both explicitly and implicitly shared information may be valuable to individual searchers.
Learning to Trust the Crowd: Some Lessons from Wikipedia
TLDR
Concerns about Wikipedia's quality and sustainable success have to be tempered by the fact that Wikipedia is in the process of redefining the pertinent dimensions of quality and value for general encyclopedias.
Labeling images with a computer game
TLDR
A new interactive system: a game that is fun and can be used to create valuable output that addresses the image-labeling problem and encourages people to do the work by taking advantage of their desire to be entertained.
Utility data annotation with Amazon Mechanical Turk
TLDR
This work shows how to outsource data annotation to Amazon Mechanical Turk, and describes results for several different annotation problems, including some strategies for determining when the task is well specified and properly priced.
Crowdsourcing for relevance evaluation
TLDR
A new approach to evaluation called TERC is described, based on the crowdsourcing paradigm, in which many online users, drawn from a large community, each performs a small evaluation task.
AI Gets a Brain
In the 50 years since John McCarthy coined the term artificial intelligence, much progress has been made toward identifying, understanding, and automating many classes of symbolic and computational…
Mechanical Turk: The Demographics. A Computer Scientist in a Business School
...
... 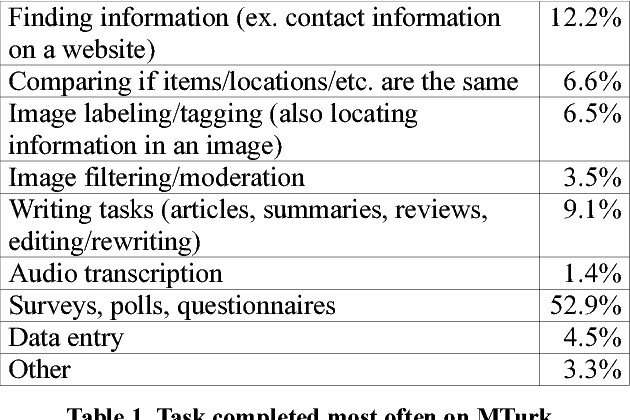